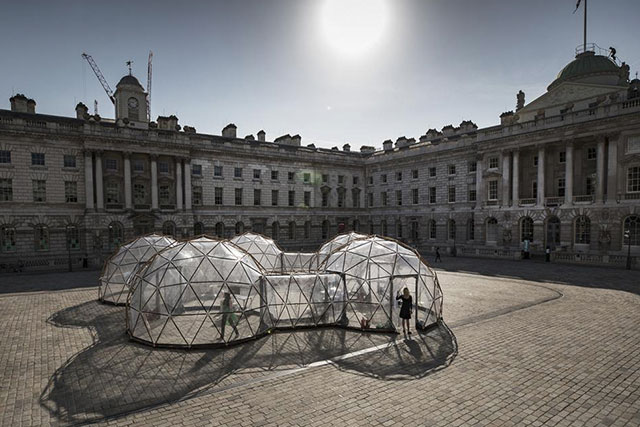 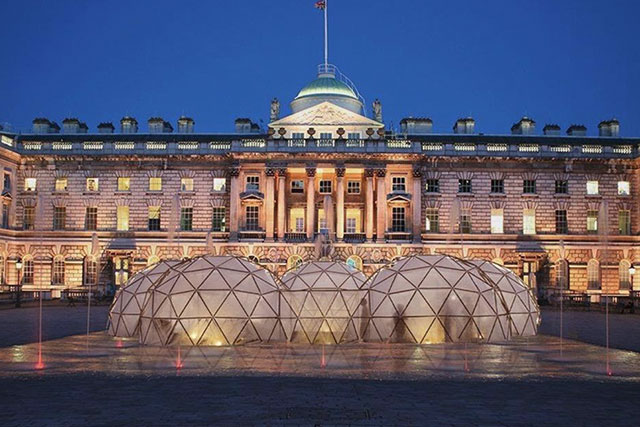 We were approached by longstanding friend of the Aroma Co Lizzie Ostrom, aka Odette Toilette for some help on an amazing project she was helping with at Somerset House- an installation by artist Michael Pinsky made up of five geodesic domes, emulating polluted environments in cities globally.

These five geodesic domes each contain carefully created environments, simulating different atmospheric conditions globally. Visitors begin in Tautra in Norway, breathing in clean smelling air and then continuing through to the cities of London, New Delhi, Beijing and São Paulo which between them suffer from some of the lowest air quality in the world.

Each replicates nuanced polluted environments which contain varying levels of ozone, particulate matter, nitrogen dioxide, sulphur dioxide and carbon monoxide. London’s invisible, but deadly, output nitrogen is followed by New Delhi where the air is filled with a haze of airborne particles. It is estimated that the average Londoner, exposed to the current levels of pollution loses up to 16 months of their life, while for a resident of New Delhi, pollution could cut short the life of a resident by around 4 years.

Taking inspiration from Buckminster Fullers’ geodesic domes, originally designed in the early 20th century to provide sustainable disaster-resistant global shelter using forms drawn from nature, the sculptural exterior starkly contrasts with the interpretation of toxic everyday realities within. Our os pro diffuser was used to diffuse the fragrance representations of pollution from each city and scented the domes with the ‘polluted’ air. ((Don’t worry, there was no danger of actually breathing in any harmful gases; special technology was used!)

The project got a bit of press- check out the links below showcasing a video of the event, as well as some press coverage