London saw in 2014 with a multi-sensory bang and The Aroma Company were proud to play its part!

In this world first, thousands of people at once, had all five senses catered for by a host of special effects.

To accompany the hugely popular and stunning annual fireworks display 100,000 people, in key areas along the Thames, received multi-sensory packs. 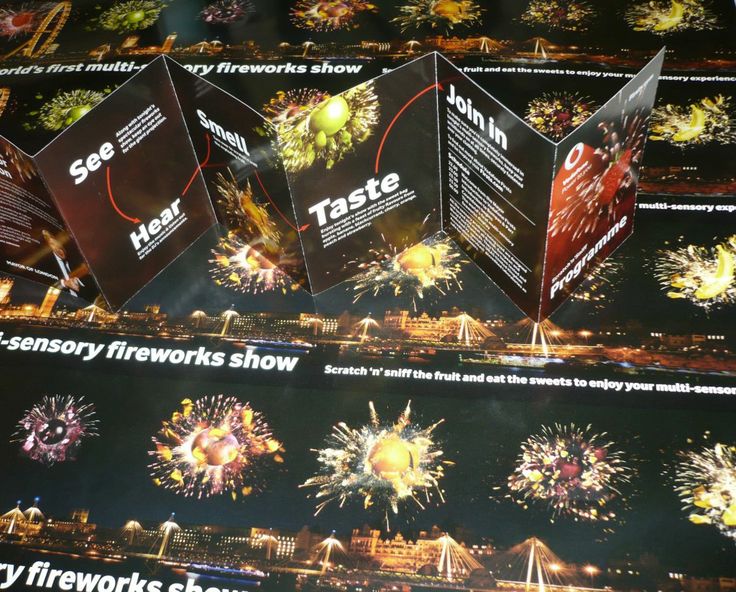 Caressing the “Touch to Smell” aroma panels, while the corresponding coloured display exploded, allowed people to smell the fireworks as well as see them!

The Aroma Company’s Touch to Smell is a modern day scratch and sniff, used to create scent solutions in print.

In another area along the Thames, another 50,000 revellers could see, smell and taste clouds of apple, cherry and strawberry scented mist, experienced peach snow, could pop enormous floating bubbles filled with orange smoke and also enjoy edible banana confetti (another world first). 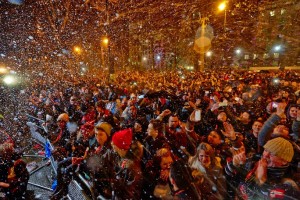 For those not able to make it into London a free app allowed people at home, an augmented reality experience synchronised with the firework display.

Val Lord said: “It’s always exciting to be involved in projects where the senses are of paramount importance to an event’s experience. Incorporating the sense of smell is extremely powerful in building engagement and creating lasting memories with attendees. Scent marketing continues to be an industry which we have been at the forefront of for over 20 years”.

The multi-sensory fireworks display was proudly presented by The Mayor of London in partnership with Vodafone and “Vodafone Firsts” – a new global brand engagement strategy. “Firsts” focuses on a simple concept: that Vodafone’s technology and connectivity can enable and inspire people to do something amazing for the first time, from making their first call to sharing their first video.

Boris Johnson, The Mayor of London, said: “A spectacular display of pyrotechnics that you can taste and even smell! Where else but London would you get such an experience? Whether you are getting a sensory overload along the river, or having your new year reality augmented at home, our partnership with Vodafone is creating a fantastic first for London, one that will help kick off 2014 in magnificent style.”

Martin Green, Head of Brand Engagement at Vodafone and the former Head of Ceremonies for London 2012, said: “We are delighted to work with the Mayor of London to bring a fantastic experience to Londoners for the first time and to use Vodafone’s technology to bring the excitement of the world’s best fireworks display in to people’s living rooms.”

Among those who have been involved in the months of planning for the display and the multi-sensory packs, were food art company Bompas and Parr (famous for its spectacular dining events and elaborate jellies), and Vodafone’s global “firsts” brand strategy agencies, Wasserman, AKQA, Rainey Kelly Campbell Roalfe/Y&R, and Ogilvy London.