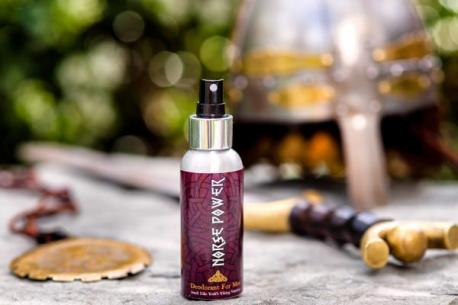 The Great Smell of Brute

It might seem highly unlikely that the modern day man would want to stink like a bearded warrior, carrying notes of blood, sweat and feet- it doesn’t seem that appealing. However, after the success of the York tourist guides we produced for the ‘Visit York’, this stinking deodorant labelled ‘Norse Power’ is the next step in the interactive fascinatingly brilliant campaign.

It was concocted by our experts using assorted pungent ingredients: deep-soaked sweat (worked up during a raid on a British settlement); seawater (from a long voyage across the North Sea from the Viking heartland of Norway); mud and damp (from travels on foot over sodden terrain); dried blood (not necessarily model’s own – from a day’s fighting and pillaging) amongst other disgusting aromas.

Michelle Brown, the marketing manager at Visit York, says ‘With Norse Power, we wanted to try and capture the sort of smells that would have been part of the lives of Viking warriors around the time that York was the Norse capital of England.’

‘But more than that, with all the bath products, deodorants, perfumes and aftershaves available today, we wanted to give male visitors to York the chance to cast aside their allegiance to modern aromas and instead embrace the smells from an era of warriors.’

The guys at ‘Visit York’ have set us some very stinky tasks since the beginning of the year, and although our noses may have said otherwise at times, we have had lots of fun in the lab finding the right aromas for the guide and now ‘Norse Power’.

York became the heart of Viking culture in Britain after it was attacked and quelled by Viking invaders in 866AD. We are very glad that all is safe and calm there now, and look forward to visiting the area and seeing all the hard work Visit York and our team have put in, paying off.

For information on how aromas can be incorporated to help you contact:

Alternatively find us on: